Read an editorial from a newspaper or magazine (I used the internet), and highlight key words and phrases that capture the essence of the article. Keep doing this until you arrive at a core set of keys words and sentences.

Use these as a starting point to create an illustration.

I listen to a lot of news on the Radio 4 and picked up on two stories that sounded interesting and something I could work with. I then followed up and read the news articles: 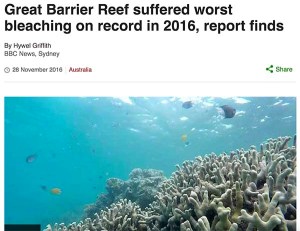 I identified key words and phrases for each news item and created thumbnail sketches for an illustration of each.

This story was triggered by a report that showed that higher water temperatures in 2016 caused by global warming resulted in the worst destruction of corals ever recorded on Australia’s Great Barrier Reef. Some 67% of corals died in the reef’s worst-hit northern section.

I have been scuba diving over reefs and I remember being amazed by the Jacques Cousteau documentaries when I was growing up, so this feels like a major disaster to me and something that should be getting more coverage.

My analysis of the article is here.

The final set of keywords/phrases that summarise the essence of the story are:

Here’s a thumbnail sketch that shows my original concept for an illustration.

I didn’t choose to develop this idea any further.

I heard the chief executive of Philip Morris (tobacco company) Andre Calantzopoulos, talking about a new less harmful cigarette product that is being launched in the UK. It has the same nicotine levels as conventional cigarettes, costs the same but has a lot less toxins.

Giant corporates such as tobacco companies that make huge profits from the misery of millions of people just make me angry and this story gave me plenty of material to work with.

My analysis of the article is here.

The final set of keywords/phrases that summarise the essence of the story are:

Andre Calantzopoulos presented the story as a huge advance for the health and wellbeing of customers. I wanted to present the alternative view.

I wanted to present the illustration in the style of a political cartoon; I find these can be a powerful and subversive way to get strong ideas across in ways that are just not possible using words and/or television/radio.

I did some internet research to find inspiration from established cartoonists.

The following pictures show the original pencil sketch and the inked artwork at the point that it was scanned prior to upload into Photoshop.

And here’s the final artwork:

Because I felt some empathy with both news items the ideas came very quickly and easily. My original idea was to sketch up the less harmful cigarette illustration using just pen and ink but then decided to try colouring using Photoshop using the same processes used by comic book colourists. I’ve never used Photoshop in this way and thought it would be an interesting lesson.

There’re plenty of helpful tutorials on youtube for this.

In hindsight, the result would have been more effective and quicker to produce using pen and ink but the experience using Photoshop was valuable and taught me a lot that I’ll use on future work.

What I could do differently/better