The brief was to create a magazine illustration based on a still life with one of four themes: Lost, disaster, discovery, guilty secret.

Still life, as defined by The Tate is:

One of the principal genres (subject types) of Western art – essentially, the subject matter of a still life painting or sculpture is anything that does not move or is dead

The purpose of the assignment was to take the learnings from previous exercises in relation to developing a personal visual style, and apply these to a formal brief.

I started by creating a mind map around the theme of ‘Lost’. 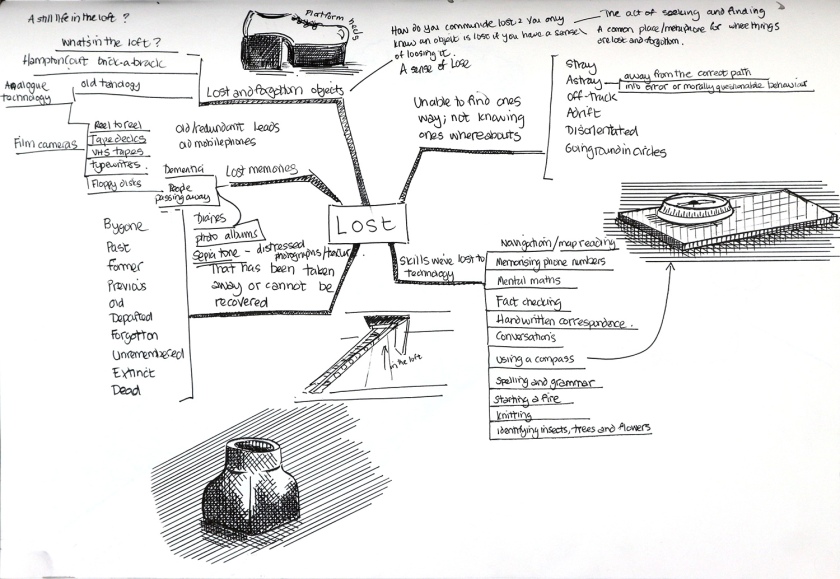 I wanted to develop the idea of ‘lost and forgotten’ and liked the idea of either exploring the objects in brick-a-brack store or, closer to home, the junk in most people’s loft.

I did some sketches from my own loft and thought this would be an interesting and engaging subject matter – the thrown away and ordinary that we all generate as we move through our lives. A museum to what’s gone before. Stuff that’s just cast off or saved just in case.

I did a recce of antique stores and did a sketch for reference. I rejected this idea because I couldn’t relate to the objects I was drawing in the same way. There wasn’t a link to my own personal history which is what hooked me about the first idea.

However, there was a lot of great material there, particularly the characters behind the counters, that I’ll probably return to at some point.

I squeezed into my loft and created an objective drawing.

At this point I also started experimenting with different techniques that I could use to render the image. I liked the idea of introducing some texture from found objects in the loft – this was a technique I used successfully in Exercise 2 – Museum poster.

I explored several different compositions that looked at the subject from a different point-of-view and started to distort objects and perspective.

A tonal version of the drawing

I decided to create a tonal version of the drawing based on the thumbnail sketch that most distorted the space. Note that there is a lot more mid tone grey in this image than I would usually use in a tonal drawing. This is slightly exaggerated because I wanted to use overlays in Photoshop that work better with darker tone. This is a lesson I learned from Part 3, Exercise 6 Viewpoint.

The line visual was a combination of the line drawing I had created for the tonal drawing and the text overlay from the final artwork. 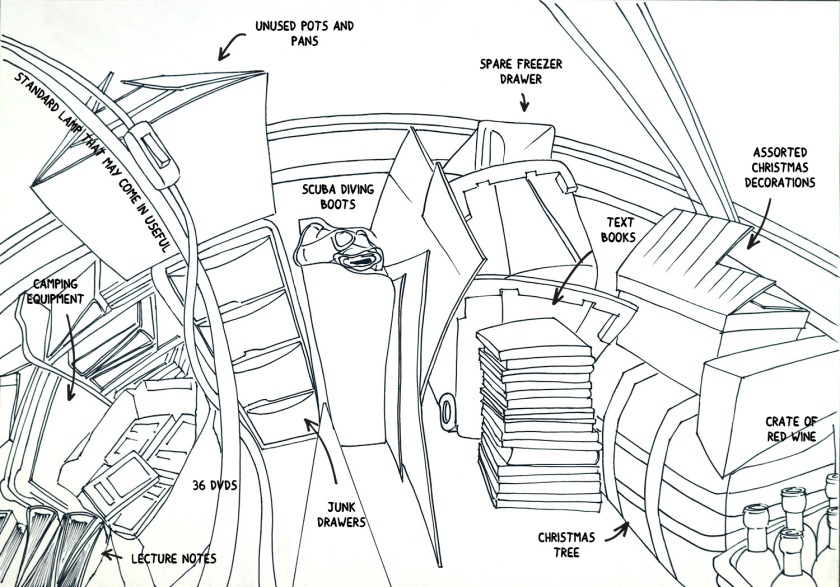 The final A3 artwork was composited together in Photoshop and consists of the following layers:

The image is composed around a single view from the corner of a loft space that is filled with junk. Text labels are used to identify what some of the objects are or what boxes contain. The image is exploring what our lost and forgotten objects say about us and our personal histories, and how they tend to end up in a disorganised pile of junk. It’s a subject that is not thought about much, but something immediate and recognisable for most people. There is also something humorous in how objects are thrown together without consideration.

Colour tone and texture are used to convey a sense of dusty fading objects. The background texture and colour are provided by an old piece of sun-bleached and faded paper. A second layer of black line art has been overlaid and offset against the original drawing. This device adds visual interest and a richness to the image.

Both the loft space and individual objects are distorted to give the impression of viewing the scene through a fisheye lens of a camera. This is a more engaging point of view for the viewer and has the effect of tipping foreword objects to give a better view of their contents.

What I could have done differently/better