The purpose of this exercise was to look at how different illustrators have represented Franz Kafka’s short story The Metamorphosis.

Key words from the brief:

The way the question is framed is ambiguous. Is it about how different illustrators have represented The Metamorphosis in a single image (an illustration for a book cover, poster or other publicity material), or does it relate to how illustrators have created images to support different parts of the text? An example would be Peter Kuper’s comic book version where the whole book is illustrated.

For the purpose of this exercise I’m assuming the former; how illustrators and designers have chosen to create a single image to represent the whole book.

An outline of the story

The Metamorphosis is the story of Gregor a travelling salesman who transforms overnight into a large beetle. He becomes an embarrassment to his family and later in the book an object of disgrace. He becomes a stranger in his own home, humiliated by the cleaning lady, unable to provide an income to his elderly parents. Ultimately he is even spurned by his sister and he dies of shame.

Most of the action takes place in Gregor’s bedroom that is part of a small apartment where he lives with his elderly parents and sister.

The main themes in the book are isolation and alienation. Gregor is transformed into a creature and gradually loses is humanity as the book progresses. He is unable to communicate and starts to eat rotten food and behave like the insect he has become. He is further diminished because he is unable to earn a living.

The book was first published in 1915 and the book is set at time in or around that period.

Analysis of the different approaches

The illustrations I’ve researched almost all have the following characteristics:

They a constructed through a limited number of subjects:

There are a small number of exceptions.

Artists have chosen to explore the themes through these subjects in a number of different ways.

Where in the narrative have artists placed the image?

Generally the images are relatively non-specific in terms of relationship to the narrative. They tend to focus on the bigger overarching themes; man imprisoned in the body of an insect, isolation and humiliation.

Even the more literal interpretations tend to be non-specific in relation to a specific point in the narrative. The man/beetle in the prison-cell bedroom.

How have illustrators’ choices framed your understanding of what the story is about?

This section considers the different components and qualities that different illustrators have employed in making images to represent the book, and how these choices give meaning to the image. 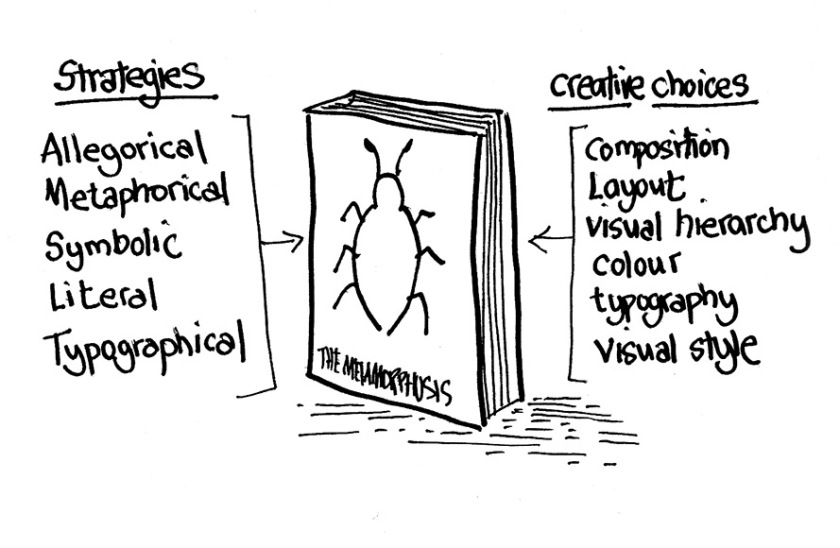 Some interpret the book as a commentary on the human condition.

This image captures something at a conceptual level that describes the overall theme of the book rather than something tied to a particular narrative event.

Where the image is a metaphor for a key theme or subject in the book.

These fall into a number of groups and many describe the man trapped in the body of an insect.

Illustrators that create images that portray a lifelike scene from the book. A man/beetle on its back on a bed is a frequent trope.

There are some beautiful hand drawn typographical interpretations reminiscent of Dadaist or Bauhaus designs.

Peter Kupers comic version of the book is great. His black and white scratchboard images are incredibly inventive.

The strong geometric shapes formed by the black shadows and light from the door lead the viewer’s eye from the shocked insect at the bottom left of the image up to the shadow of the figure in the doorway.

There are many great examples of handwritten typography. I’ve chosen this one because it’s one of the more inventive versions showing the man/chrysalis; a great metaphor for the subject of the book.

Visual style and use of colour

Visual language plays a strong part in how the subjects are interpreted by the reader or viewer.

The visual language for many of The Metamorphosis illustrations reflect the early 20th Century period of the book and the visual style that was predominant in Germany at the time; a combination of Dadaism and German Expressionism.

This illustration is a good example where the scene and use of colour could have been lifted directly from an Max Beckman painting.

This cover is intriguing because there is no direct reference to the narrative and yet there is something unsettling about the figures around the table.

Which do you think is the most successful version?

This is a really hard choice but there’s something distinctive about this interpretation. From a readers perspective the cover is strong and intriguing and part of a series of Kafka Penguin Classics that use the same visual approach. The way the photograph is taken and the man/object/sculpture is in a dadaist style.

The overall design is strong and the hand drawn heading and subheading work well with the image.

The idea of a man trapped or wrapped inside something describes one of the overarching themes of the book.

Figure 1 The Metamorphosis Starke, Ottomar At: 4.bp.blogspot.com/…/metamorphosis-jacket-of-first-book-edition.jpg (Accessed on 23.10.19)

Figure 3 The Metamorphosis At: flavorwire.com/467349/50-excellent-fabulist-books-everyone-should-read (Accessed on 23.10.19)

Figure 6 The Metamorphosis At: http://www.flavorwire.com/333791/beautiful-book-cover-collages-of-famous-titles?utm_source=feedburner&utm_medium=feed&utm_campaign=Feed:+flavorwire-rss+(Flavorwire) (Accessed on 23.10.19)

Figure 8 The Metamorphosis Jang, Salene At: 3.bp.blogspot.com/-Gsek-B4vmYU/UdRvb5V53sI/AAAAAAAAA0U/KBjN9T_WkTs/s750/Metamorphosis+Salene+Jang.jpg (Accessed on 23.10.19)