The purpose of this assignment is to pull together all of the learnings from the previous exercises into an 8-page narrative sequence.

Key words from the brief:

How I approached the work

I’ve produced a number of narrative sequences during Illustration 1 and as personal projects and have a general interest in developing my work in this area.

I saw this assignment as an opportunity of bringing together new elements/approaches discovered during previous exercises including:

I created the work during the last couple of weeks of March 2019 which coincided with the supposed culmination of Brexit; the 29th March being the agreed date that the UK was leaving the European Union.

There was a huge amount of political confusion and what commentators described as a constitutional crisis.

Several marches were organised during the week leading into the supposed day of Brexit.

I thought the marches both made excellent subjects for a short narrative. High journalistic value, high drama and conflict. Visual material should be easy to collect; the trick was to find a story to link the material together.

I didn’t really think too much about what I was going to say (a big mistake), but instead decided to dive into the first event with my drawing kit and sketchbook to see what I could capture and what would catch my attention.

Using the fill-it-up-fast approach I decided to switch on my ‘record button’ and keep going until I had to stop.

I travelled to London on the train and aimed to reach the march starting point near to Hyde Park about an hour before the start.

There were many protestors on the train with folded banners and EU berets, hats and badges. I started drawing straight away.

The sequence of drawings maps my time at the march throughout the day, from arriving at Waterloo Station, walking to the start point and the extremely slow shuffle along the edge of Hyde Park.

All the sketching was done in an A5 sized sketchbook using ink pen, Sharpie and liquid watercolour brush pens.

I sketched for about 5-hours and decided to call it a day just after 4 p.m. tired, hungry and needing the loo.

I listened to news bulletins throughout the evening to gauge reaction and gather more material.

The Sunday papers and political tv and radio programming was an interesting source. The debate was around how significant (or not) the march had been and how much, (if at all) should politicians take note. In line with the rest of the debate, opinions varied hugely.

The second march was held on Friday 29th in Parliament Square which luckily for me is only one tube stop away from Waterloo Station which is on my route to and from work.

I walked up from Westminster tube station into the late afternoon sunlight at about 5pm. Parliament Square was full of protestors and various speakers on a stage were being projected onto a massive video screen.

I sketched for about an hour and then walked across Westminster Bridge to Waterloo where I caught a train home.

As well as sketching I also tool photographic reference of the People’s Vote march.

Drawing on the work of other illustrators

There are three illustrators that I looked to for inspiration for this assignment.

Mariana Grechanik for her rapid drawing and sharp observational skills. This informed that way I approached my primary research.

I have admired the work of Olivier Kugler since I first came across his work right back at the very beginning of Key Steps in illustration.

His reportage drawings explore strong characters and interesting/difficult subjects. They are underpinned by detailed primary research using mostly photographs and audio. The results are interesting and engaging and combine fragments of descriptive text, conversation and an extremely distinctive eclectic visual style.

What I paid attention to is how he approaches his work, particularly his method of research, and why he chooses his subjects i.e. what makes a good character and good engaging story.

Another illustrator/journalist I admire for his non-fictional comic investigative journalism that deal with big difficult subjects: Palestine and Footnotes in Gaza, on Israeli–Palestinian relations; and Safe Area Goražde and The Fixer on the Bosnian War.

His stories and illustrations provide an insight into his subjects that is not achievable or accessible using other media.

My main learning from his work is how you take a massive subject, that most people have switched off to through news coverage fatigue and provide the narrative hooks to retell the story in an engaging and surprising way. There are so many great examples in his illustrated books.

Trying to find a narrative structure was really interesting and challenging. The over saturated news coverage meant that the difficult part would be to find a new or interesting hook to hang the story on.

The subject seemed full of potential and extremely, even historically significant. The impact of Brexit (whatever was decided), would affect generations to come, and Britain’s standing in the world.

However, the story has been covered over and over again and it became clear that using just the 8-point story arc from 4.3 Story structures was not enough. The way the narrative (how the story was framed) was equally important as the narrative arc.

To help me with this I used the Focus Sentence suggested in Jessica Able’s podcast Out on the wire.

Someone…….. does something…… because…. but something stands in the way.

I toyed with a couple of different approaches.

1-million people marched on Central London because they felt that the original Brexit process had become so divisive and such a political shambles that any way forward should be put to a People’s Vote, but incompetent politicians and self serving political parties put their own interests in front of the interests of the country

Over 1-million remainers and several thousand leave supporters marched in Central London during the last week of March because they strongly believed in their diametrically opposed causes, to either stay within the EU or leave with or without a deal. But political stalemate, weak leadership and self serving political parties resulted in political stalemate.

The focus statement made me see that option 2 was too bigger subject to deal with in 8-panels. The narrative had lots going for it; drama, plenty of conflict and failed characters, but it would need a lot more development and research than I had had time.

So I opted for the simpler option 2.

I applied the 8-point narrative arc and mapped this against the script and the images in the sequence:

I found this a useful structure that evolved continuously until I settled on this final sequence and script.

I thumbnailed a number of different layouts and narrative storylines as my thinking developed.

These are all made in an A5 sketchbook alongside lots of notes.

Fairly early in the process I mocked up a page using just observational sketches to test my approach to building the page, grid layout, use of font and how well the observational drawings stood up for themselves. 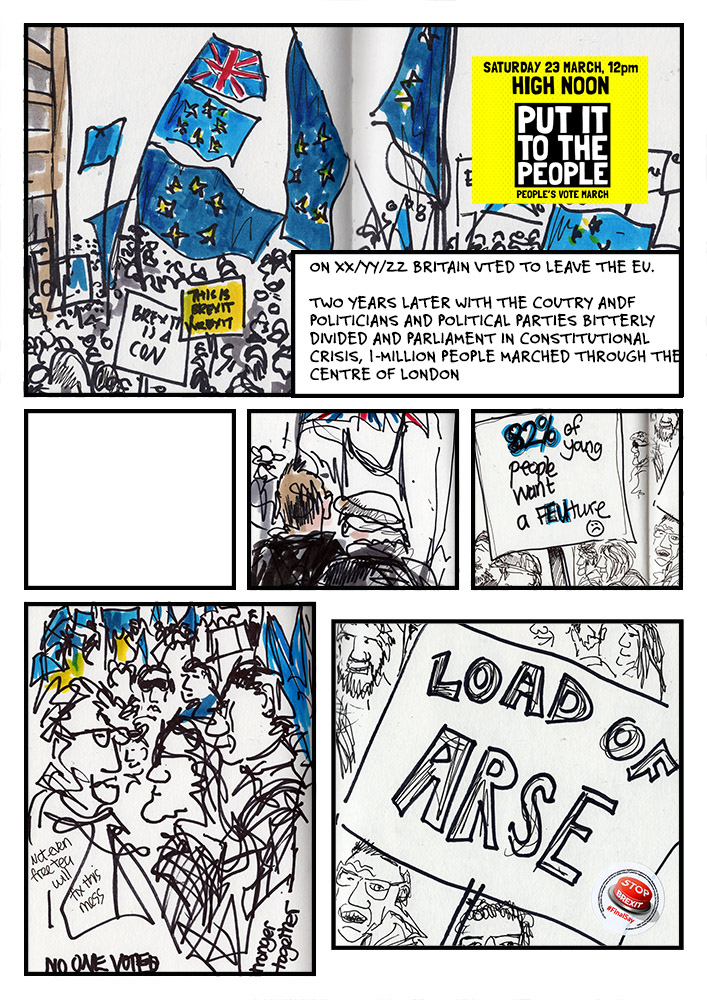 When I began to combine all the elements together I felt that the observational drawings weren’t strong enough on their own. I decided to try using the same technique employed during Assignment 3 Illustrative people and places, where I added a foreground layer to a background observational drawing to give a better sense of depth and strengthen the composition.

I created a number of new foreground drawings in the studio using the photographs from the first march as my reference.

The final image was composited together in Photoshop.

I started by laying out the panels and text boxes with thumbnail placeholder images, and then began pulling in the final images, completing each panel one at a time.

The final artwork was A3 sized at 200 dpi. I could have worked at a higher resolution but given the output wasn’t going to print this seemed unnecessary. 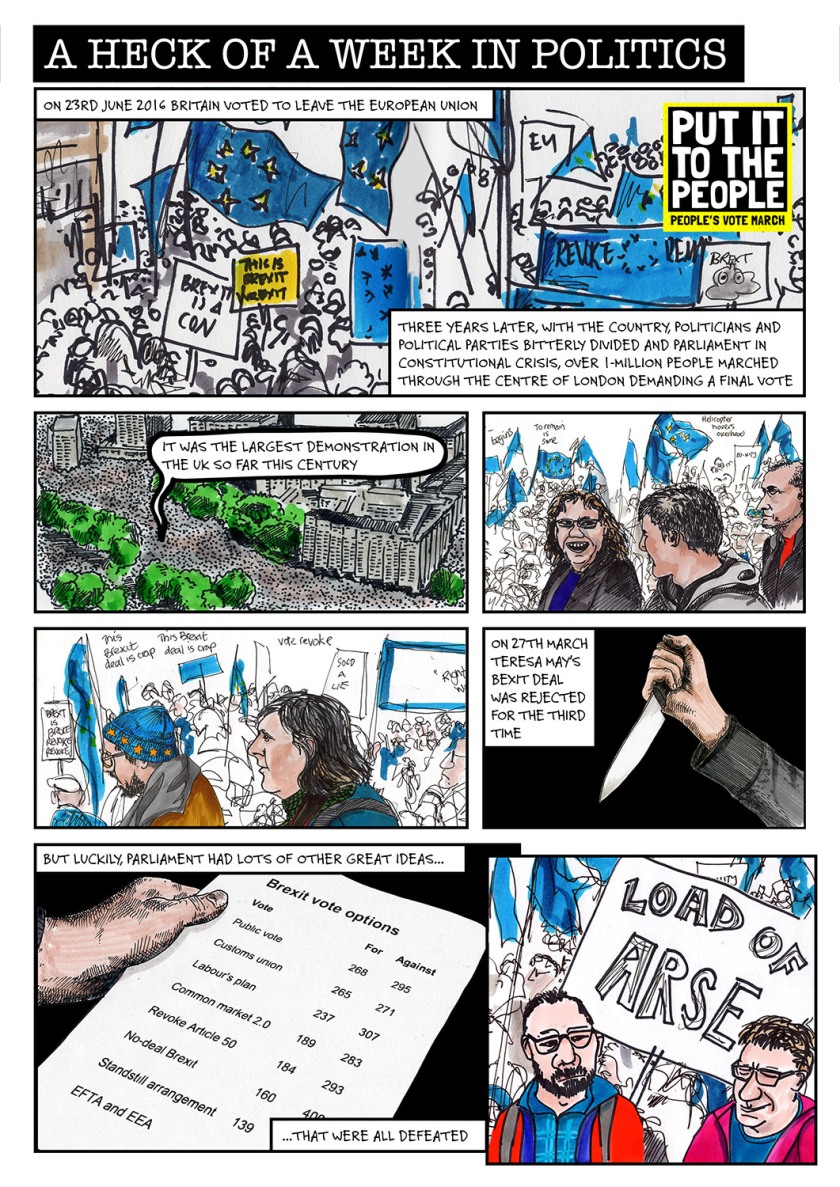 I shared the comic strip to the Sitewide Hangout on 14/04/19 in order to get other student and tutor thoughts/feedback.

The feedback was insightful and aligned with my own thoughts.

My reflections on this:

The lessons for me:

The brief asked the following questions:

Reflect in your learning log about what you learned and enjoyed most from this part of the course and what you might use in the next section where you will choose the direction of your final assignment.

I think I probably enjoyed 4.0 Fill it up fast! the most. Using The Old Operating Theatre as the subject was a great idea because I was spoilt for choice when it came to filling up the sketchbook. Each object in the museum had its own strange story, and the overall framing of the subject was intriguing. It made for a very memorable day and provided a new way for me to collect visual research and information really quickly. I employed this technique to gather primary research in Assignment 4.

4.1 Description & depiction provided another useful technique to quickly add additional information to sketches. I will develop this in future work and is something that will carry through to final artwork. For example, I left some of the text descriptions in the drawings for Assignment 4.

The research task 4.3 Story Structures opened up a new way of thinking about how to structure stories that I’m finding fascinating. I’m currently working my way through Jessica Able’s Out on the Wire podcast where this subject is explored in a lot more detail.

Finally, Assignment 4 has been a great learning experience and pulls of of these elements together.

How did including written description alongside your drawing affect the way you were ‘capturing’ information?

It made me more aware of the non visual elements of the subject and scene in front of me and made me capture additional layers of valuable information. As well as having this written description as future reference on the sketchbook page it also added to my own visual and non-visual memory of the experience.

How did you find the process of moving from descriptive drawings towards fictional narratives?

I chose to create a non-fictional narrative but I think the experience of moving from descriptive drawings into narrative sequences is more or less the same.

For me the leap is a big one. It’s moving from the role of just illustrator into, writer, researcher, editor and graphic designer. What makes a good story and how you think about character and narrative structure is fascinating.

We talked about having conversations with previous illustrations, which of the illustrators mentioned in this section’s work did you have most dialogue with?

I really like the reportage sketchbooks of Marina Grechanik. I can relate to her way of working; rapid drawing the the essence of a place and the people. I experimented with her technique of drawing with different coloured pens in 4.0 Fill it up fast!.

She has a great eye for capturing posture and movement which create a strong sense of narrative – that’s probably the biggest prompt for my own drawing.